If you have paid any attention to the political scene in America lately, you will proabably have heard about Obamacare, as it is colloquially known, or the Affordable Care Act.  It has been making waves for a number of political reasons, but a key religious freedom argument has arisen from it.  Hobby Lobby has sued the governement (or actually Kathleen Sebelius who is the Secretary of Health and Human Services) over being forced to provide contraception that they, and the FDA, have deemed could prevent a fertilized egg from implanting on the uterine wall, which is “technincally” an abortion and against Steve Green, the owner of Hobby Lobby, and his family’s Christian beliefs.

Hobby Lobby is a Crafts Company owned by Steve Green and his family.

In this article from Religion News Services, they discuss not only Sebelius v. Hobby Lobby Stores, which is being heard by the Supreme Court this month, but also Steve Green’s religion.  The first oral arguments are scheduled to be heard March 25th.  For years, even before the mandate was sent out, Hobby Lobby has been providing 16 of the 20 FDA approved contraception methods as part of their insurance plan.  They merely have an issue with the others, specifically IUD’s and pills like the Plan B pill.  There grounds are that these could technically result in an abortion, and since abortion is against their Christian beliefs, they should not be required to pay for it.  What the case really boils down to, in my opinion, is does Hobby Lobby as a corporation have the same protection under the First Amendment as a person.

There is no doubt that Hobby Lobby, much like Chick-fil-a is an overtly Christian company.  Not only are they closed on Sunday, but on their Hours sign, for Sunday it says “Closed Sunday to allow employees time for family and worship”, but they also refuse to do business with companies that promote alcohol.  The Green Family Foundation is even opening a Bible Museum in Washington DC that will display thousands of ancient texts.  There is no denying that the Hobby Lobby Corporation as a whole is clearly an overtly Christian Corporation and should be afforded the same rights as a person. 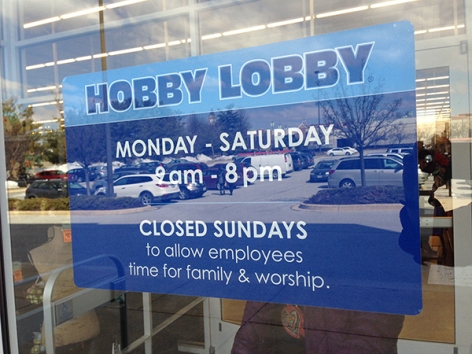 Hobby Lobby is closed Sunday for “family and worship”

When we were reading Albanese’s book, we also discussed in class how the first amendment in America was unlike anything that had ever been done before.  There was to be a complete distinction between the religion in America and the government in America.  The question this case is raising, is how far does the protection given in the Free Exercise clause of the First Amendment.  Hobby Lobby is claiming that the government forcing them to pay for things that violate their religion is a breach of the Free Exercise Clause, specifically “Congress shall make no law […] prohibiting the free exercise thereof”.

The reason Hobby Lobby might have a chance is that Hobby Lobby is filed as a Closely Held Corporation.  This means that they are owned by a few select individuals, which in the case of Hobby Lobby, and in most Closely Held Corporations, is almost entirely members of the Green family.  This basically means that even though it is a large corporation, it is still a family owned business, and since the family members are the people who are liable for the company, they technically are the company.

No matter what way this turns out, it will be a landmark case in the religious freedoms in America at this time.  Be sure to look out in the coming future about the results of this case. 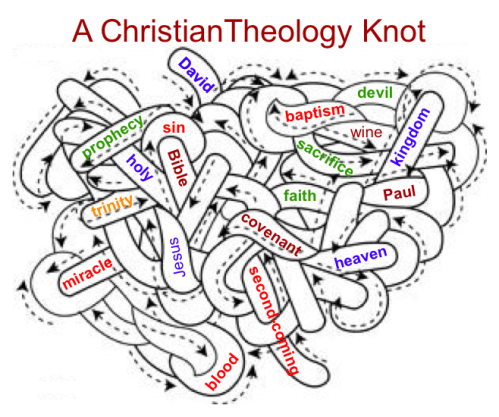 Throughout history, Christianity has been at the forefront of America’s religious culture, and that still holds true for the present. It is the most popular religion in the United States today—in fact, the PewResearch Religious Landscape Survey shows that nearly 78.4% of American adults identify themselves as Christians—but is this religion really one unified faith? There is something to be said about the fact that the poll lists major denominations as separate entities (even dividing Evangelical Protestants and Mainline Protestants), and what is even more interesting is the sheer number of subcategories listed under each tradition. Many varying beliefs comprise most American religions (“Catholic,” “Jehovah’s Witness,” “Other World Religions,” and “Don’t Know/Refused” were the only traditions in the PewResearch survey that did not have subcategories listed), but Christianity’s ubiquitous differences are undoubtedly the most prominent.

Why is it that Christianity in America seems to be defined by contrasting theology? Can it really be classified as one unified faith, or are the differences enough to call the varying denominations separate religions? A great example of this concept is illustrated in this episode of Cheers, where a married couple fears for the sustainability of their relationship due to religious differences—specifically differences of denomination.

In this dramatized example of religious tension in America, Kelly and Woody are not even of different faiths. Not only are they both Christian, but they are also both Lutheran—they simply belong to different subsets within the Lutheran church. If the seemingly minor contrasts between the Lutheran Church of Missouri Synod and the Lutheran Church of America are large enough to cause inter-personal issues such as these, what is there to say about Christian denominations as a whole? Woody’s statement that he and Kelly are “from different religions” seems to be a comical exaggeration, but is there actually merit to this claim?

In America: Religions & Religion, Albanese defines a religious system in terms of four variables: creed, code, cultus, and community. A comparison of denominations of the Christian faith would in fact show that there are distinct differences in each of these categories. The creeds, or explanations about the meaning of life, vary if even by a small factor. This is illustrated humorously in the above Cheers episode. The codes, or rules for everyday living, are very distinct among denominations too. How often in Christian culture are people arguing about how others of the same faith are living? The cultuses, or rituals to act out the understandings of the creeds and codes, most certainly differ; each denomination has a different idea about baptism, communion, worship, prayer, and other church rituals. The variance in community is the most prominent, as tight-knit church culture is pervasive in Christianity today.

So if each category in Albanese’s definition of a religious system is different for each denomination in the Christian faith, does this make each one a separate religion? This is a possibility to think about, but the answer may be deeper than just generic characterization. According to studied definition, people of Christian faith may belong to many different religions; yet they identify themselves with each other, bonding over a sense of shared beliefs. It follows that this idea of common community and personal connection does not come from the strict categories that Albanese and other religious scholars put forth to attempt to define religion; it comes from the idea that they have unified faith. Many endeavors have been made to characterize and explain religion, but it seems that even ones as broad as Albanese’s fall short when it comes to conundrums like denominations within Christianity. Defining religion is a difficult undertaking; even the most prominent example of religion in America doesn’t seem to fit perfectly into a label. Maybe this is a result of identifying the term with the wrong definition. Perhaps faith and religion are two very different matters, or perhaps denominations are simply examples of “religion inception” (religions within the main religion of Christianity); either way, the lines appear to be blurred, and maybe they always will be.

Grains of Salt and Degrees of Faith: What Makes a Miracle? 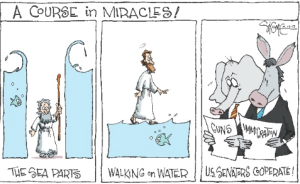 How do you really know whether something is real? Espeically in the age of dime-store card tricks and photo shop, it seems we cannot even trust our own eyes half the time. Beyond that, though, there is also so much suspicion regarding such things.  With this in mind, where can miracles actually come into our lives? In his article, “The power of miracles: Naples’s prodigious blood,” BBC ‘Heart and Soul’ correspondent and former friar Mark Dowd tries to find a good answer.

Taking what he calls “a very large dose of salt to accompany [him],” Dowd explores the credentials of a few ‘miracles’ throughout the world and especially Italy, ranging from the Neapolitan feast of San Gennaro (or, Saint Januarius) in which a vile of the saint’s ancient blood can turn from a 5th century solid back into liquid form.  to the supposedly posthumously healing of Pope John Paul II, and even a comparatively much ‘smaller’ and substantially lesser-known miracle in an Italian suburb in which a man (Signor D’Alfonso) was brought out of a comma through the praying ferocity his sister-in-law, a nun, who organized prayers for him.

Perhaps the most interesting thing about these stories is that all of them are either confirmed or toted as real miracles not just by Dowd, but also by the Vatican and other faithful. The scope of the miracles ranges incredibly, as does their respective celebration and their acceptance. For example, while thousands gather in the streets to witness whether or not Saint Januarius’s blood will change and consider it a moving miracle if it does, many – including Dowd – would “like to [examine] the phials and their contents several hours beforehand” to be sure the change was not mere illusion.

On a similar note, although Signor D’Alfonso’s case has been holistically confirmed in the Vatican through multipe medical testimonies, he rarely speaks of the event in fear that it “will be misinterpreted as mere vulgar ‘magic’ rather than as an invitation to deepen one’s faith because of a sign.” In efforts to canonize Pope John Paul II, many must also sort through and investigate uowards of 3,800 claims of his extraordinary posthumous intervention in believers’ lives.

Ultimately, Dowd’s experience leads him to state that miracles much be viewed “through the eyes of faith” and while I agree, the term feels a bit overly-simplistic. Clearly what makes up a miracle (and how people should incorporate such miracles into their lives) varies tremendously depending on the person, like all ‘faith.’

To return once again to The Color of Christ, the face of God is ever-changing, both through how he is seen and shared. The original missionaries in America, Catholics appropriately enough, brought with them a god or god image of rules and statures, of colonizing rather than adaptive faith, much the same way the ritualistic observation of the saint’s blood in Naples  remains fairly uniform for decades at least. In contrast, the Moravians brought a more malleable interpretation of Christ and Christian faith, with more of a focus on the sacrificial and healing capacity of Jesus, which fit more easily into the lives and culture of Native Americans than the mission-based image given by the early Catholics the way that Pope John Paul II’s healings and the miracle for Signor D’Alfonso are significantly more individual. Rather than basing the variance of such miracles on the “eye of faith” then, we might also consider the lens of circumstance. After all there is a substantial difference between witnessing a miracle in the middle of a Church festival, and seeing one at home or in a hospital room.

Feast of San Gennaro in Naples

This of course, does not mean that any miracle is less important, or that any image of Christianity should be dismissed. Despite their differences after all, the Jesuits, Protestants and Catholics of old (and those to whom they witnessed) were brought to the same God. These miracles happened somehow and are real to someone.